Hack the Dot goes to Durango We’re headed to Durango, Colorado for most of next week for three days of hackathons, coffee and donut buying, and random acts of kindness. We can not tell you how happy this makes us. Durango is one of those little mountain towns that fills you with hope for humanity. The people are friendly and the restaurants are amazing. It has to be an awesome place because getting there is fraught with peril. There is no straight shot from Denver—and the drive is rife with obstacles including animals that bound out in front of your vehicle and prairie police with a talent for materializing out of thin air. Lynx have been spotted near Salida and at least one mountain pass has been known to give people religion. Still, it’s worth it.

We’re going to test the limits of ourselves and push the boundaries of marketing domain names to a place where soul and sales can co-exist. For example, our first stop is at Cafe Dawn’s in Salida. We’re hosting a fundraiser for their trails and open space group. We’ve even made an ad to run in the local paper. It’s a cool way to help out such an amazing part of the community whilst providing a friendly reminder that there is a domain registrar in the very state in which they live. (They don’t need to default to some place in Arizona. Or wherever.)

Also, we use the word “whilst” which should count for something. 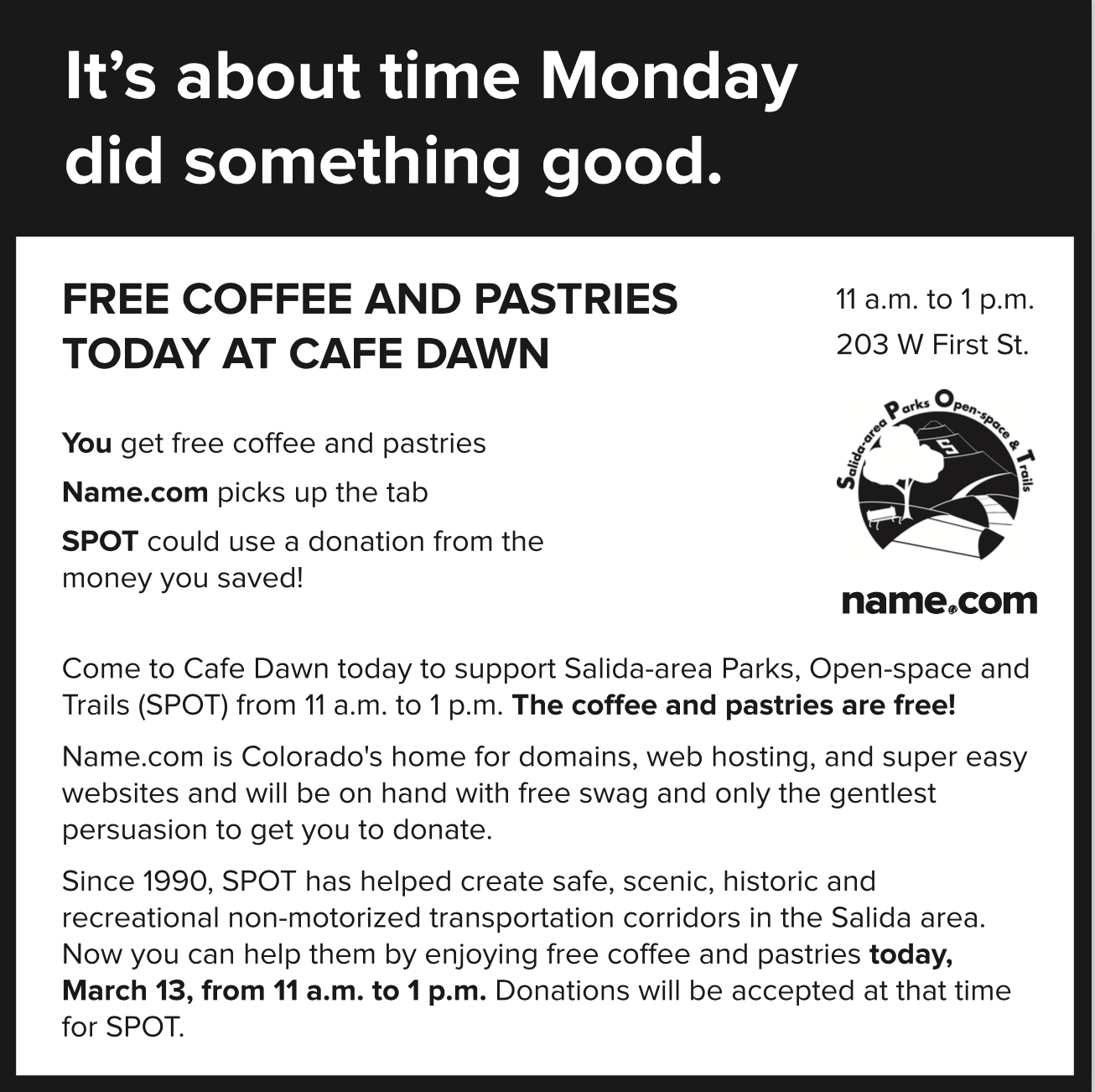 Having avoided deer and survived the rather aggressive police defending the stated speed limit in the Saguache area, we’ll arrive in Durango and do some kind of giveaway on 92.9 FM. (We bribed their morning show with bacon to make it happen.) Later that afternoon, in conjunction with the Durango Chamber of Commerce and Fort Lewis College, we’ll host a Hack the Dot at ImageNet Consulting.

Wednesday morning could be an opportunity to buy coffee and/or find and interview some Name.com customers. Maybe do a MOTSCRAK (Man on The Street Committing Random Acts of Kindness) and provide video evidence that marketing can be beneficial to all, including suspicious people in the street.

That night, Name.com will host the Mix n’ Mingle to wrap up the event. And then it’s early to bed because Thursday is going to be a long drive home.

So if you’re in the area or are in the mood for an adventure, make your way to Durango next week—we promise it’ll be well worth the effort. What is Hack the Dot? Thanks to .TECH for supporting Hack the Dot Seattle (it was awesome!)