The Iliad and the Odyssey and Account Management: The Epic Story of a New UI

Don’t fear the unknown. Embrace it. That would be an amazing slogan for the epic account management project we just wrapped, if projects could have slogans. In case you don’t know what I’m talking about, we are launching a whole new domain management experience on Tuesday, April 9th, and it’s going to blow your mind!

Hopefully you noticed my deliberate usage of the word “epic” in the project name. According to Wikipedia a (literary) epic “is a lengthy narrative poem, ordinarily concerning a serious subject containing details of heroic deeds and events significant to a culture or nation.” That’s exactly what happened for the duration of this project. Not convinced? Allow me to relay the epic saga that is the Name.com account management facelift. It’s a tale that dates back to the beginning of time.

Well…to the beginning of my time at name.com anyways. 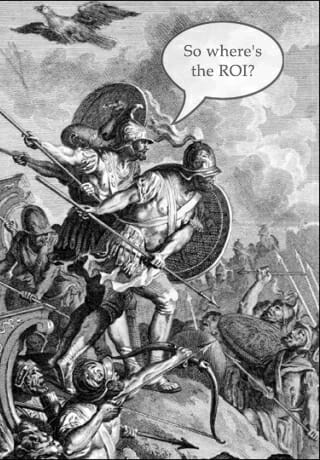 I began working at a name.com in September of 2011. I made it all the way through my second day before anyone referenced an “account management facelift” in front of me. As soon as I’d heard the term it became impossible to un-hear it. Conversations about improvements to domain management seemed to pop up everywhere. Requests would pop up in our support queue, our twitter feed, on youtube comments, in casual conversations, everywhere. It was clear almost immediately that this was something employees and customers alike were itching for.

Prior to my employment here someone decided to hire a company to come up with photoshop mockups for a new interface in account management. By the time I arrived the project was going south, fast. Designing a new interface with all the functionality in the existing name.com account management proved to be extremely difficult and extraordinarily expensive. While this company knew what they were doing from a design perspective, they didn’t know a whole lot about the finer points of DNS management.

Some of my earliest meetings here consisted of me in a room with a few other folks walking through the mockups and providing feedback to the designers. We went through a whole song and dance with them. We liked their design, but nobody felt good about actually implementing the UI they proposed. The real problem was that the third party we used was focused entirely on design, not user experience design.

At the end of the project we took all of the mockups and put them in a folder. They stayed there for over a year, collecting figurative dust. The conversations didn’t stop. In April of 2012 we hired a kickass UI Engineer that knew a lot about UX design and shortly thereafter we started tracking all the user requests that came through the pipeline.

We categorized these requests and mapped them to tools in account management that we could improve. Armed with this information (and the mockups from our previous failure) we kicked off an all company brainstorm and tried to gather as much information and creativity as we possibly could. Our UI Engineer took a stab at creating multiple versions of mockups that utilized a new convention we had introduced on our DNS Management and Transfer Management pages. After kicking the mockups around internally we decided on a final version, and then the real fun began. We initiated user tests to get real feedback from real users of our tools, products, and services.

We put the word out on social media and through our support team that we wanted to take people through initial concepts and flows for the new name.com account management. We conducted 5 in-depth user tests and ran an interactive flow mockup past 3 external users as well as everyone internally. We learned a lot through the UX process for this project, and got awesome feedback from some of our loyal customers, and a few new ones as well.

So, what did we do next? Using the results from the user tests we created the final scope for the first release of the project and our developer ninjas began coding. Everyone watched in awe as the project exploded and became larger than we thought it initially was, the ninjas coded some more, we banged on it and tested every case we could think of, ran another round of user tests, and finally are ready to push this bad boy out the door.

It is with great pleasure that I’d like to introduce you to our new account management, featuring an intuitive new design and sprinkled with lots of awesome new tools.

We poured our blood, sweat, and tears into it and we hope you LOVE it. There’s certainly a lot of intricacies, and we recognize that, so please keep the feedback coming. The interface will continue to evolve with direction from you. Cheers to the teams both internally and externally that helped make it happen!

Is it beer Friday yet? How To Grow Your Etsy Shop With A Website