How we created dark mode on Name.com Name.com got a whole new look and feel a few months ago when we launched our new brand. But it wasn’t just a new coat of paint that made the site look different. The front-end team leveraged the launch of the new Name.com brand as an opportunity to do a full rebuild and architect the entire site from the ground up with fresh new templates, CSS, and clean semantic HTML. There were several things we needed to clean-up, some new tech we wanted to use, and there was another reason too: 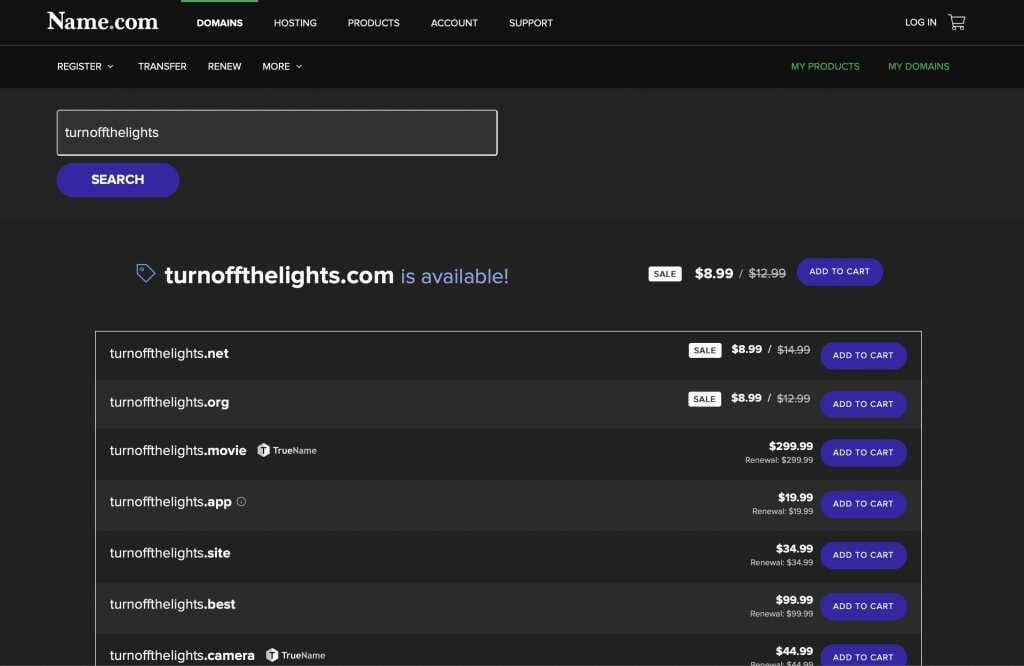 Maybe you missed the announcement at GitHub Universe a few weeks ago, but it’s clear that turning down the lights and giving customers a dark mode option has gone mainstream. Dark mode isn’t just a fad for tech geeks who stare at dark IDE’s and terminal windows late at night in their dim basements. There are quite a few good reasons to consider dark mode, from energy load and environmental impact to accessibility and an opportunity to integrate modern web technologies.

Why we chose dark mode

While our new brand is very clean and bright, it didn’t take long for our dedicated customer base to express their feelings:

We wanted dark mode too. It had been on our radar for a couple of years so when the rebranding project began, dark mode was on the wish list. But we knew from the beginning that we wouldn’t be able to build out the new brand on schedule and on budget while including dark mode—it would have to be added later.

But with dark mode in mind as a future project, we were able to lay the groundwork for an easier integration; namely with smart semantic HTML structure and global CSS classes that could be swapped with a single stylesheet of about 320 lines of CSS (even less when we swap out with CSS Variables).

Taking the time to build the foundations correctly turned out to be a crucial piece of the design that allowed us to add dark mode with significantly less effort and frustration.

First, we couldn’t put an invert(0) on everything and call it a day. As a user-focused feature, it’s important to remember that user choice is key. While we wanted the option of dark mode to be available for anyone who wanted to use it, we also wanted to avoid alienating users who prefer a traditional view.

This meant building a toggle for users to decide which mode they preferred, with the added option of a System theme that would automatically switch between the two based on the user’s operating system settings. While more complicated, respecting user choice is a core value for our team and the only way we wanted to see this built.

And second, everything needed to work flawlessly. It was very important that we didn’t have a janky solution that was slapped together. The entire site had to work in any theme: dark, light, or any other array of colors if we decide to add them in the future. This meant countless hours of testing, evaluating, and revising our code until we got it right.

How we did it

Most of creating a dark mode theme revolves around swapping out site colors. This means experimenting and choosing the right combination of background and foreground colors that stay true to the brand while still creating sufficient contrast for readability and accessibility.

There are a lot of different approaches that we could have taken to achieve this. In the end, we felt that instead of modifying any HTML or server-side generated code, we would rather design a system that could elegantly swap colors site-wide based on some simple CSS classes and a few clever tricks.

Here are few technical details about how we implemented site themes:

Why dark mode is important

Dark mode is more than just a personal preference. While a lot of folks might hold strong opinions about dark vs. light (like tabs vs. spaces levels of opinions), there are positive environmental impacts from using a dark theme on your website.

In some cases, dark mode can reduce power draw by more than 50%, extending battery life for mobile devices and reducing the overall energy impact of your site. Multiply that by millions of visitors per year and it’s real, measurable amounts of energy. 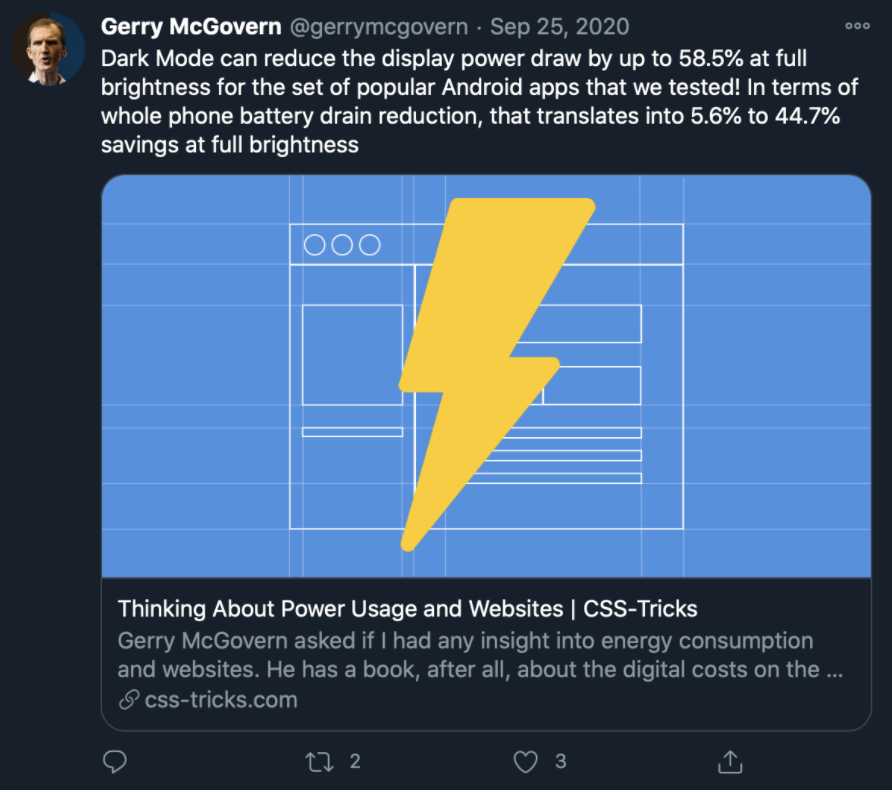 There’s also a real-world environmental cost to running a website. Data centers use a lot of electricity, network traffic and data transmission have real energy impacts, and all that translates to carbon emissions into the air that you and I breathe. You can use a site like Website Carbon Calculator to test your own site and see the impact on the environment, then continue to strive to make it better. 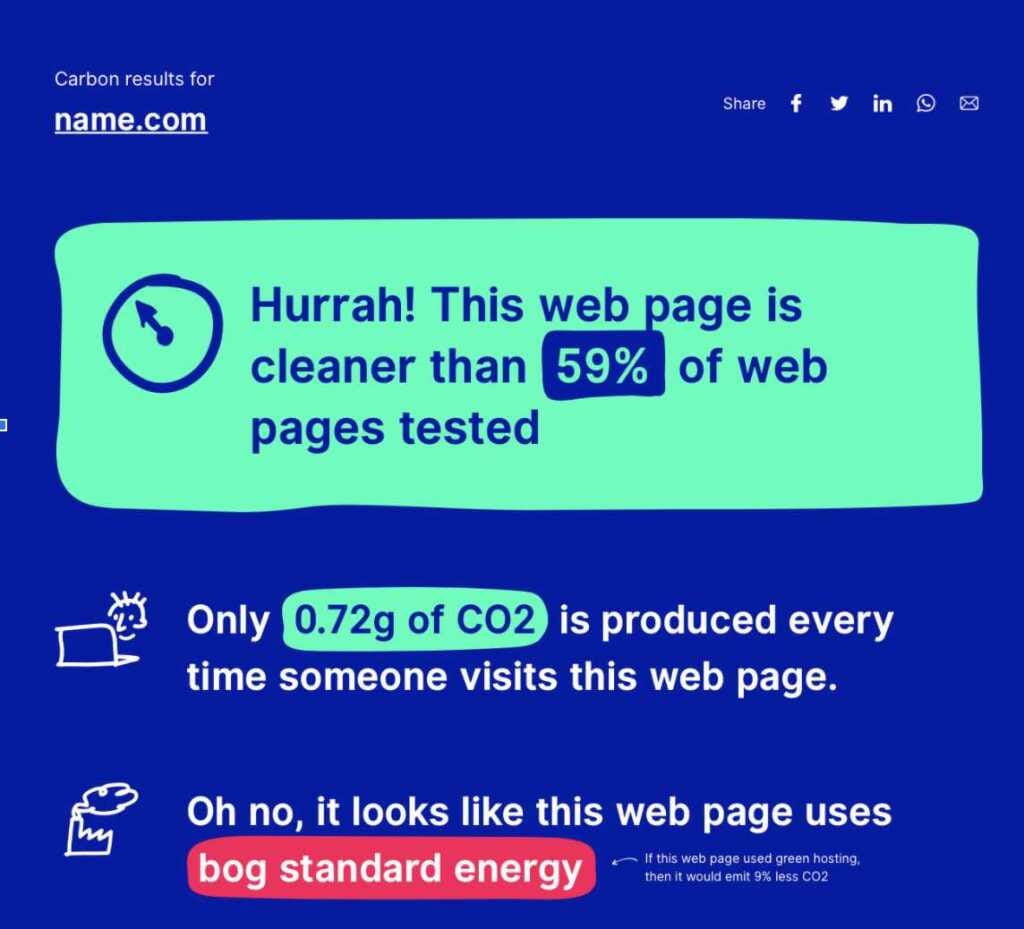 So was it worth it? Yeah, absolutely! As fans of dark mode ourselves we were excited to use it on the site we visit every day. And it looks like a lot of our regular visitors agree. Within the first week, 83% of users who participated chose to turn on dark mode.

If you’re considering implementing dark mode on your website, go for it! We’d love to see what you come up with. Share with us on Twitter so we can check it out. The best domain tools in the industry? Yeah, we think so too.